DIARRHEAL DISEASES​
Diarrheal diseases are the third leading cause of death in Swaziland affecting the entire population. This is primarily due to unsafe water. 26% of the population drink water from unimproved and unprotected water sources. 43% of the population also use unimproved sanitation facilities or open defecation.

​Unimproved sanitation facilities - bucket latrines, pit latrines with no ventilation or cement slabs and shared latrines that are used by multiple families.

​​HIV/AIDS​​
​Swaziland rank number one in the world for HIV prevalence with a total of 28% of the population (210,000 people) living with HIV/AIDS. This results in 78,000 orphaned children due to HIV/AIDS. The distribution of HIV prevalence is shown below.

​Regardless of gender, most children in Swaziland complete their primary education and 87% of the population have basic literacy skills. This accomplishment is thanks to the government for providing free primary school education including books and supplies. Unfortunately, after primary school, these numbers drop substantially (as shown by the chart below). The lack of education results in 70% of the population becoming subsistence farmers. Leaving careers such as doctors a position left only for dreams. With only 1 physician for every 6,000 people it perpetuates the high disease burden.

This small landlocked country, located in southern Africa is home to just under 1,500,000 people. The median age in Swaziland is only 21 years. The young age of the population coupled with a 40% unemployment rate (due at least partially to drought or disease) results in not only a high amount of orphans but also a decrease in the economic stability of the country. 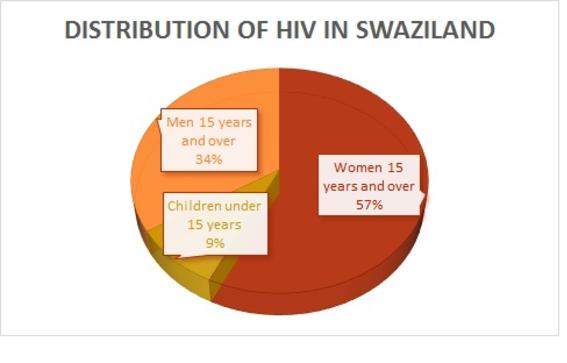 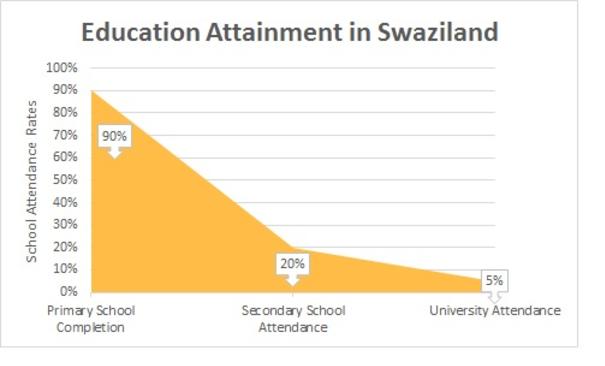